In my opinion, besides Underground 2, this game is the best from the series.

I played this game many times over and over. It has two ways you can play the game trough, one is Evolution, and the other is Factory Driver.

In Evolution mode, you start with the first Porsche and drive trough many maps to evolve in time. There are 3 main eras, classic, golden and modern. They are separated, but the gameplay does not really change during era switch. At the end of each era, you get to race a special car and if you win, you get that car for free. You can unlock a lot of cars here, but the best aspect of the Evolution is the fact that you can customize cars. You can change their color, add stripes to them, buy parts and upgrade the car with the new, better parts.

I had to play this game for the second time to realize the player had this option.

Factory Driver is about you becoming a test driver for Porsche. You have to fulfill missions to proceed, but the missions get pretty hard after a time. You get to drive very good cars in this mode and you can also receive bonus cars after you pass stages.

Overall the game has nice graphics, and a beautiful soundtrack. Maps are nice and driving is realistic, your car can break and you have to take care not to smash into anything, if you want to finish a tournament. Also it is a very good opportunity to meet the Porsche family, there are details about every car in the game, if you are curious.

I had a lot of fun with this game, but had to play it multiple times to play it trough, because I was too young when I first tried and could not bare to lose. Also my driving skills back then were not as good as I wanted to. 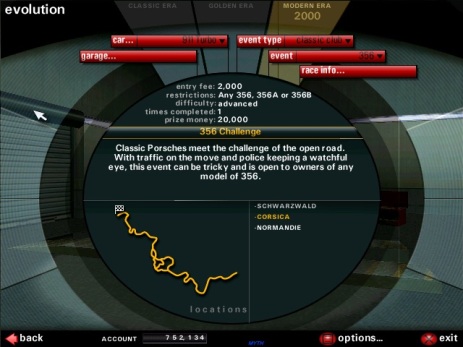